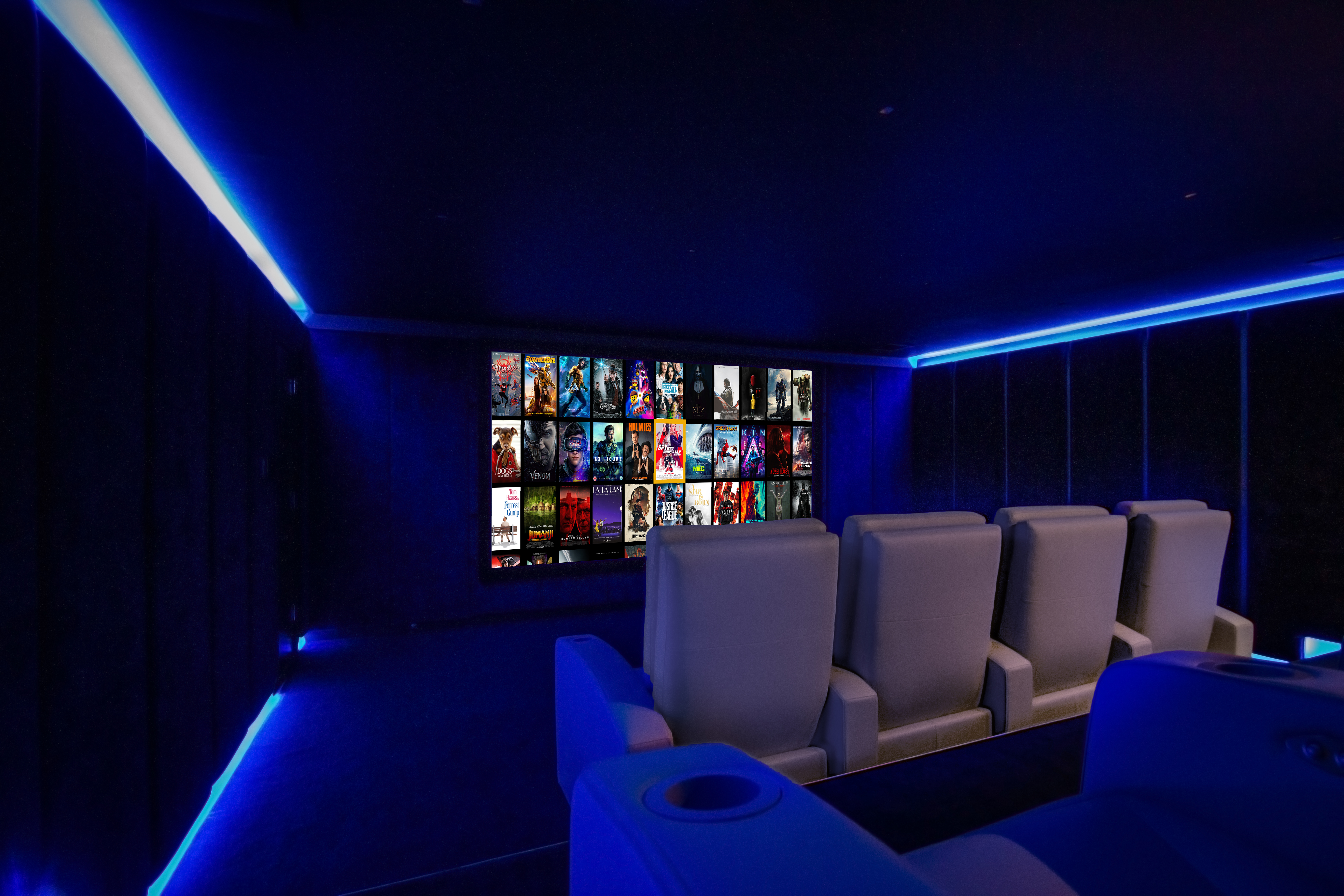 El takes the tour of this impresive and high-performance home cinema by Gibson Integration.

Gibson Integration was formed in 2011 and is led by company Owners and Directors, Colin Scrivener and Kevin Dawkins, who between them have a combined industry knowledge of 48 years. The company is a specialist in home automation and systems integration and home cinema and they produced this absolute beauty of a project.

The company has a strong track record in the industry, recently completing a full systems integration installation of an eight-storey single residence in Mayfair. The installation included the control of 307 individual lighting circuits and 98 custom made lighting keypads, full HVAC control, multiple custom-made mirror televisions, 4K video distribution to 32 screens and audio distribution.

On the home cinema side of things, the company recently designed and installed a stunning 11 seat, three-row, Dolby Atmos 7:2:4 4K cinema. As well as installing all cinema components inclusive of seating, the team supplied and fitted acoustic room treatments including application of fabric to all walls. Gibson also designed the lighting arrangement in the cinema, including ceiling, wall and step lighting. The installation was part of a full systems integration installation to a new build property including control of 164 individual lighting circuits, full HVAC control, 4K video distribution and internal and external audio distribution. 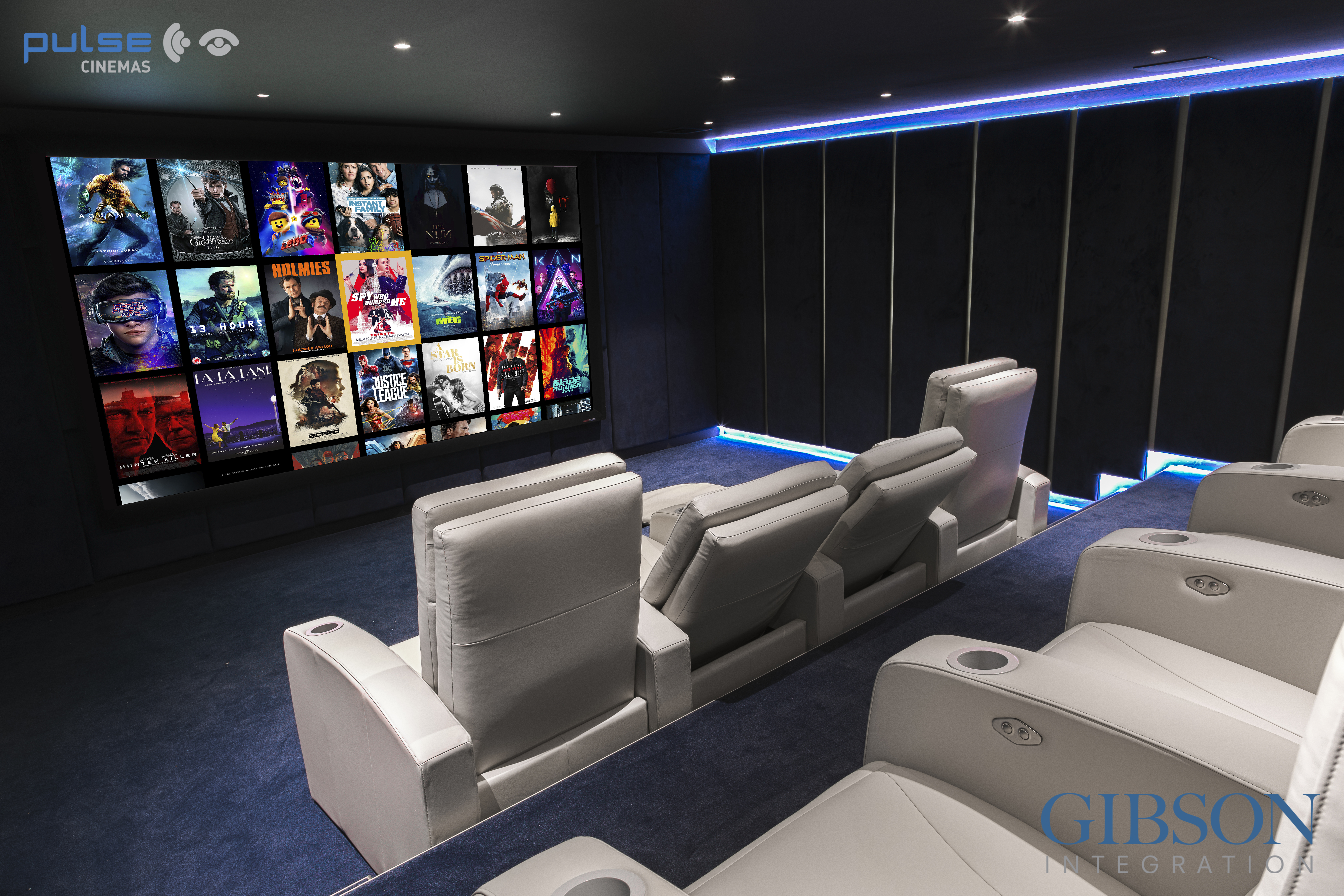 So, how about this project and how it came about?

Colin explains, "We were recommended to our clients by an M&E Consultant that we had worked with on a previous project that had included a large cinema we had designed and installed. We arranged for our new clients to visit the recently completed cinema at the previous project for a demonstration, after which we were instructed to design and install a cinema for them.

"The original brief was reasonably straight forward. Our clients had requested that the cinema should seat nine, sound great and look amazing. Working alongside the client's building contractor, we set to work designing the layout of the cinema. We produced a full suite of working drawings detailing tiered floor design, screen wall construction details, panelled wall layout including acoustic room treatments, ceiling and wall lighting design and audio-visual wiring requirement. During the construction of the cinema room, we arranged to meet with the client's chosen interior designer along with our client to discuss colour scheme, acoustic fabrics and floor covering."

There are plenty of options these days in terms of product choice; what approach did the team take here?

Colin explains, "As mentioned previously, our clients had requested that the cinema should sound great and look amazing. Having installed Paradigm speakers on a number of previous projects, including the cinema that we had recently demonstrated to our client, we naturally followed suit and employed a 7.1 all Paradigm configuration.

"The left, centre and right channels consisting of three Paradigm Ci Pro P3-LCR along with a Paradigm RVC-12SQ subwoofer were mounted in the screen wall behind the acoustically transparent Screen Research screen. Four Paradigm Ci Pro 80 speakers providing the side and back channels were flush mounted into the ceiling. We selected an Anthem 720 MRX AV receiver/amplifier to comfortably drive all seven speaker channels and installed a Paradigm X-850 amp for the subwoofer." 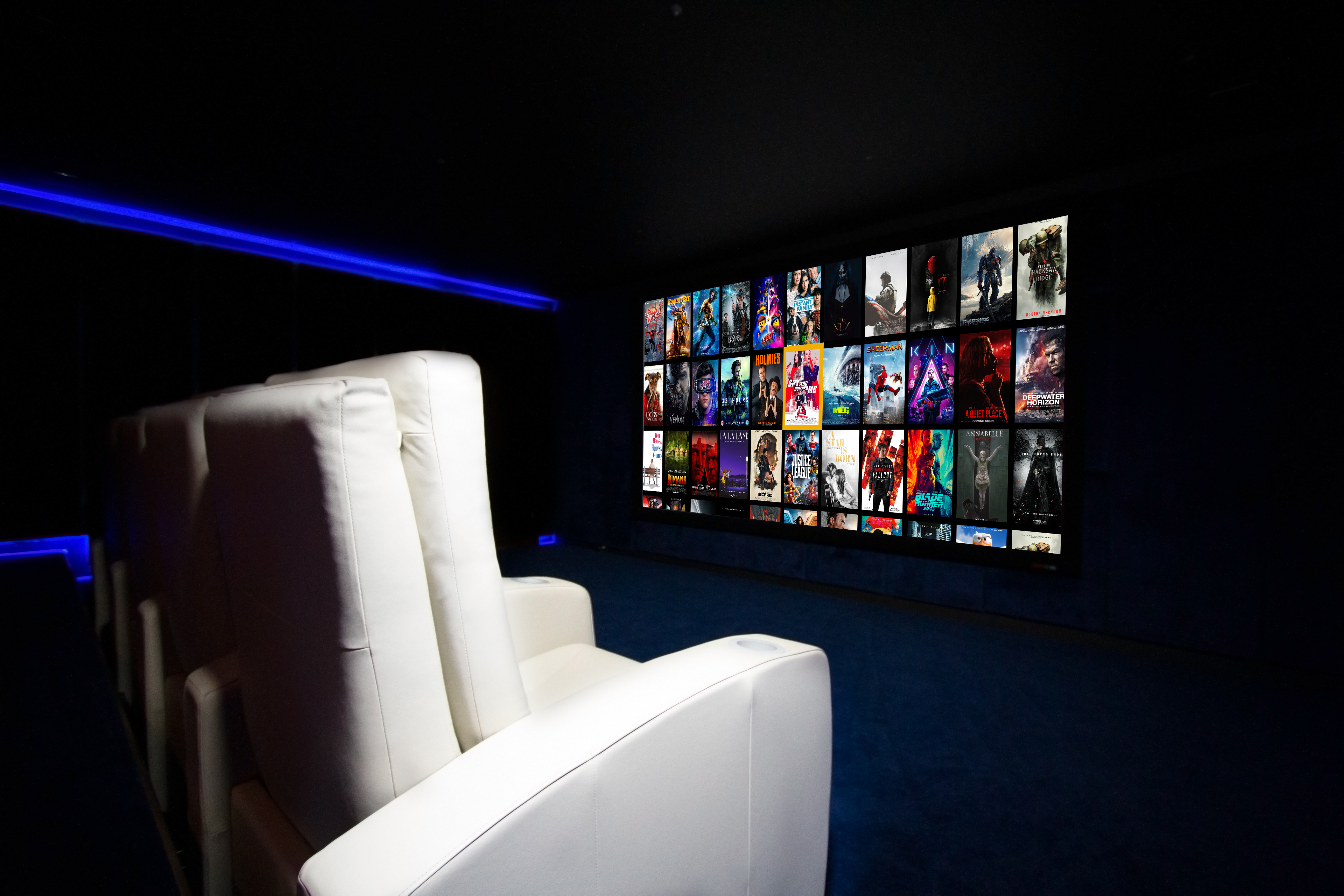 Projector-wise Colin says that having been present in several demonstrations at Pulse Cinemas, the team decided on a BenQ 4K HDR lamp projector.

Colin expands, "We mounted the projector on the ceiling at the rear of the cinema and set to work on carrying out the relevant adjustments to calibrate the projector to produce an image onto the 120in wide 1:78:1 (16/9) screen. Although this was our first outing with a BenQ product, we were incredibly impressed with the clarity of the picture and colour range produced by this single chip unit.

"We selected Crestron as our control interface due to the fact that we had used Crestron throughout the rest of the house to provide integrated control of all systems. Crestron lighting control was employed in the cinema to create a number of lighting scenes which were selectable via the Crestron TSR310 handset and in wall keypad."

Colin reveals that the location and shape of the room presented a couple of key challenges.

"The cinema room was located in a recently constructed basement and ceiling height within the room had been set. The ceiling height presented our Technical Systems Specialist, Kit Radmore, with the challenge of ensuring that all nine seating positions in the room had a clear view of the entire screen.

"Screen height, screen size, tiered floor level and head clearance were carefully calculated to the last millimetre. We even went to the lengths of instructing Ineva, the custom seat manufacturer, to increase the seat pan height of the rear row of five seats by 80 mm in order to successfully complete the complex equation. Our efforts were duly rewarded as final testing confirmed a clear view for all!"

Now it's handed over and up and running, Colin concludes, "It's difficult to single out our favourite part of the cinema due to the fact that, in this particular case, one component perfectly complements the next. That said, if you ask me what my client's favourite part of the cinema is, I can confidently tell you that they are thrilled with the seating and are utterly impressed with the clarity of the image and the dramatic sound quality and have commented that they have already spent many an hour lost in cinematic bliss."

Some really top attention to detail here, turning this good cinema into a really great one. 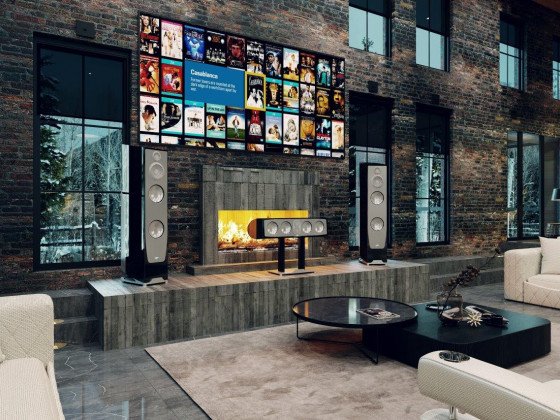 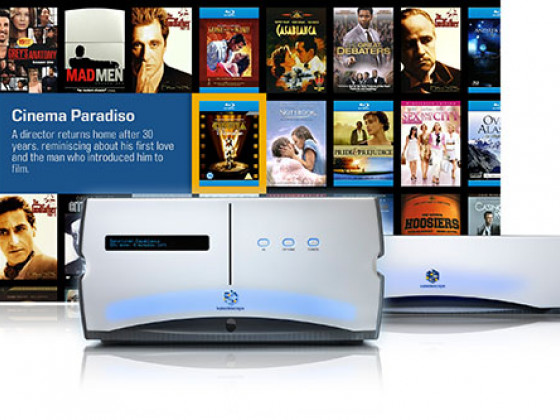 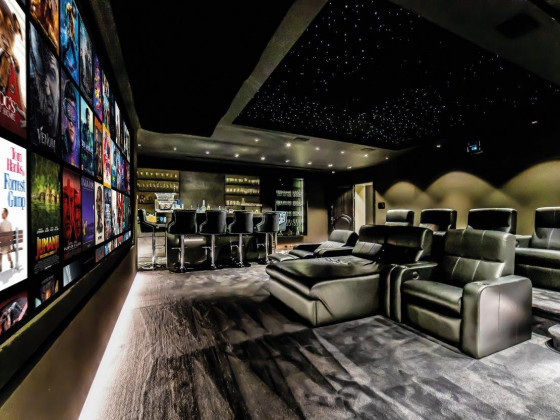 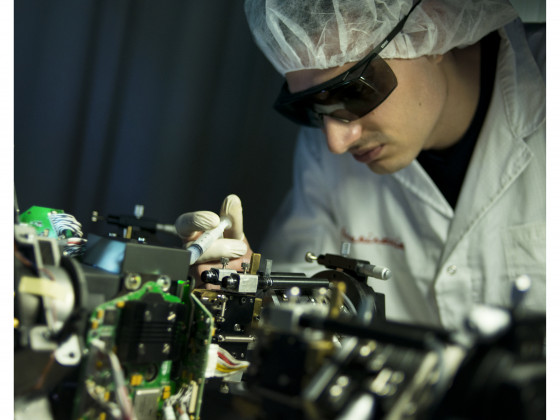 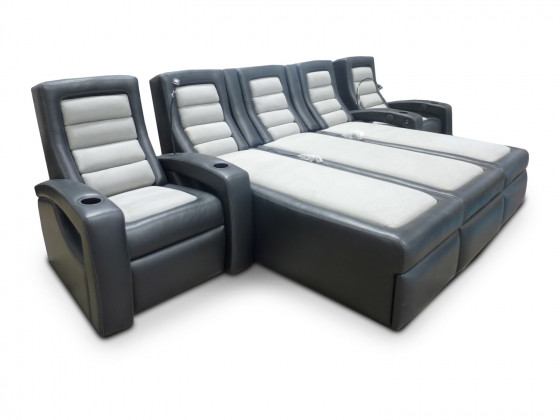 BUILD A FORTRESS AND PROTECT STYLE AND COMFORT 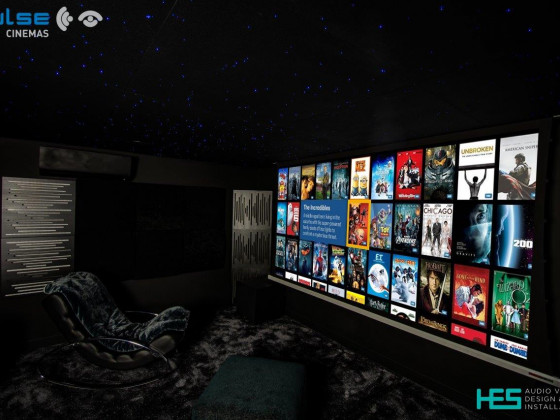 Minimising Risk During the Covid-19 Outbreak

IsoTek / Bluehorizon Must Need Products For All Systems