A home cinema without compromise, Hampshire

Pulse Cinemas is fortunate to work alongside the UK’s finest smart home and AV installation specialists supplying them with the high-quality equipment and support services they need to create high-performance projects such as this.

A great example of this partnership can be seen in this wonderful project known as the Hampshire Smart Home.

As part of this stunning project, the homeowner wanted Cyberhomes to create the ultimate cinema room. The family wanted the new cinema to have it all; the biggest screen possible, state-of-the- art audio-visual quality, beautiful materials and a touch of luxury.

In a project such as this, detail is everything, right down to sourcing leather upholstery from the same tannery that supplies luxury car maker Aston Martin. These are the kind of lengths that Pulse installation partners will go to make sure the customer gets exactly what they wanted.

The cinema has its own dedicated sources for movie selection including the world’s best film and content delivery system, the Kaleidescape – Strato. There is also a games console connection point.

High-quality visuals are provided by a large screen and a high-brightness Digital Projection 4K laser projector. An acoustically-transparent Screen Research XLR3 screen was also called on to complete the room’s impressive AV credentials. Motorised side-masking allows the screen area to automatically change with the video source’s aspect ratio; and to close entirely to protect the screen when not in use.

Again, going the extra mile, Cyberhomes optimised these for watching sport during the day, general TV viewing in the evening and for screening movies in the dark.

Achieving the perfect lighting conditions inside the cinema meant removing an external window to block out natural daylight. To preserve the aesthetic balance of the exterior of the property, Cyberhomes installed a ‘false’ window in its place, complete with double-glazing, a motorised Lutron blind and integral LED lighting, so the exterior of property retained the same appearance.

The homeowner wanted the very latest in surround sound, so the team installed a Dolby Atmos 7.1.6 system, consisting of 15 James loudspeakers and four subwoofers, enveloping those using the cinema in a simply awesome audio experience.

The room was also sound isolated from the rest of the home, to prevent disturbance when the cinema is in full flight.

Creating a cinema with high-performance is just half the story however, pleasing aesthetics and easy control were also key.

A special acoustically transparent, stretched-fabric wall was commissioned to create a unique, undulating sawtooth visual effect in the room. The fabric wall is striking and tactile and conceals 15 speakers as well as the acoustic treatment panels. Dramatic LED strip-lighting helps emphasise its textures and dispels the need for central lights. The room also has a beautiful star-field ceiling to add another touch of drama.

The cinema has an intelligent Lutron lighting system. As soon as content starts to play, the lights dim, leaving low-level illumination from the stair lights (except during daytime viewing).

Topping off the room, is the tiered seating Cyberhomes designed and built giving everybody in the room an unrestricted view. People in the front row get an extra level of luxury as they can stretch out and relax in the comfy loungers.

“We have a beautiful living room, but I think we’ve only been in it once, because we love our cinema so much! Cyberhomes gave us the best of everything: the look, sound and picture quality. It still blows my mind every time I go in.”

“We have a beautiful living room, but I think we’ve only been in it once, because we love our cinema so much! Cyberhomes gave us the best of everything: the look, sound and picture quality. It still blows my mind every time I go in.”Homeowner, Hampshire 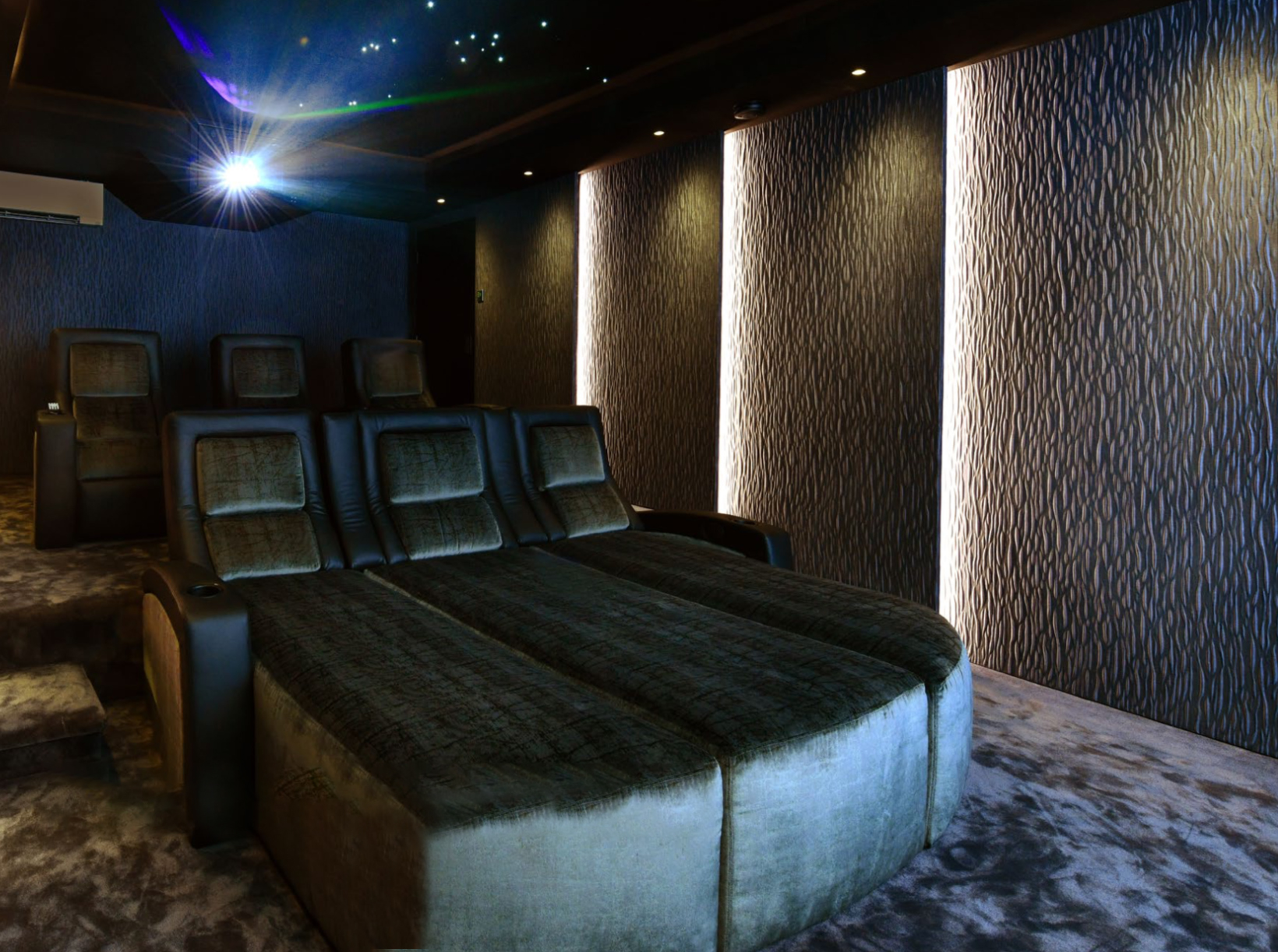